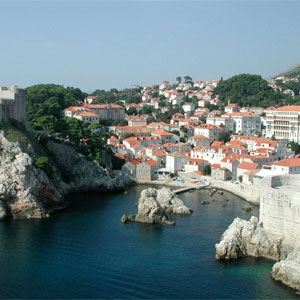 Spectacular natural scenery, historical sights, and exciting cities await you on this fantastic tour through Mediterranean Eastern Europe, including Croatia, Bosnia-Herzegovina, and Slovenia.If you’re fascinated by beautiful views, this Eastern Europe tour will delight as you surround yourself in the greens and blues of this exhilarating vacation. In Croatia, you’ll visit Plitvice National Park, a UNESCO World Heritage Site famous for its lakes, waterfalls, and forests. You’ll experience Croatia’s Dalmatian coast, with a beautiful coastline and dramatic limestone cliffs. You’ll also visit the Postojna Caves in Slovenia, with its web of tunnels and stalactites, via a train ride and walking tour-allowing you to see what are possibly Europe’s most extensive and best-known caves. If you’re interested in historical sights and UNESCO World Heritage Sites, you’ll be thrilled on this tour through Eastern Europe. Visit Dubrovnik’s Franciscan Monastery, with a history dating back to the 1300s, and Rector’s Palace, a gothic-renaissance palace dating to the 15th century. In Split, visit Jupiter Temple, built for worshipping the Roman God and the Roman emperor Diocletian, and the 4th-century Diocletian’s Palace, a well-preserved fortress and UNESCO World Heritage Site. In Mostar, see the Old Bridge, the city’s symbol built in the 16th century, and Turkish House, built in 1635 and one of the best-preserved residential structures from the Turkish period. Finally, in Sarajevo, visit Gazi Husrev-Beg Mosque, built in 1530 and the most important architectural monument from the time of Ottoman rule. This value-minded Eastern Europe tour through Croatia, Bosnia-Herzegovina, and Slovenia is simply a magnificent vacation!

Prices are per person, land or cruise only, based on double occupancy. Offer subject to availability and change without notice. Some restrictions may apply. Please ask us for details.

Charges not included in the land vacation price: airfare to and from the start of your vacation; airline baggage fees including checked and/or excess baggage fees; Federal inspection fees for the Federal U.S. Customs and Immigrations; agricultural tax; other per person taxes imposed by government entities; applicable cruise taxes, fees, fares and port charges; passports; visas and vaccinations; transfers; tips to your Tour or Cruise Director, Local Host, driver, Local Guides, and/or ships’ crew; gratuities on ferries, trains, and cruise ships; laundry; telephone; minibar; alcohol, beverages, and food outside of the contracted menu as presented at a hotel or restaurant (these extra items will be billed to you before leaving the hotel, ship, or restaurant); additional excursions and activities not listed as ‘included’ in the itinerary; porterage at airports or train stations; Travel Protection premiums; and all other items of a personal nature.

Click on the buttons below to request a quote on this deal or contact us directly with further questions or comments.

Request A Quote Send To A Friend Have A Question? Contact Us